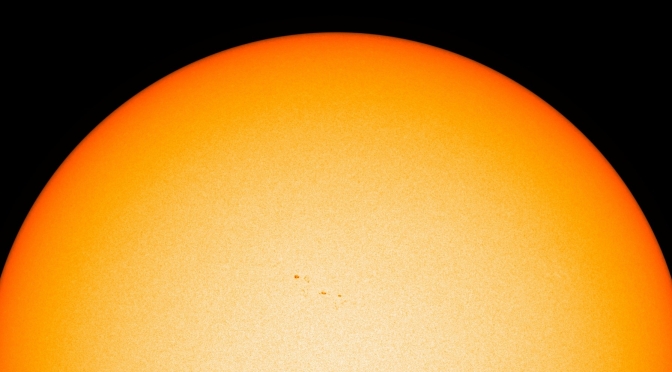 It’s been raining cats and dogs!

Earlier this year, Schwadron et al. reported on observations by the Lunar Reconnaissance Orbiter’s CRaTER instrument (abstract printed below). This instrument was specially designed to measure cosmic ray intensity when the Sun is shielded behind our moon. The report states that cosmic ray intensity is now the highest it has been since we started measuring cosmic rays, and it’s getting more intense faster than expected.

Cosmic rays are electrically charged atomic nuclei, hurtling through space at incredible speeds. There are two flavors of these little morsels. One type comes from the sun, and are called solar energetic particles, or SEPs. The other type are generally thought to have been blasted out of supernovae, and then accelerated around the Milky Way and other galaxies by intense intergalactic magnetic fields. These are called galactic cosmic rays, or GCRs.

Both types of speed demon are so small and so fast that a few may have shot through your body in the time it took to read this sentence. But sometimes, those cosmic rays hit other atoms. When they do, the effects can range from cosmic ray showers, to lightning, cloud formation, malfunctioning Toyotas, heart attacks, cancer, or even evolution.

Schwadron et al. showed that, if the hail of specifically galactic cosmic rays keeps intensifying at the rate it has over the past five years, it could become a dramatic risk to our astronauts.

In 2009, the Lunar Reconnaissance Orbiter (LRO) launched with an instrument designed to study the cosmic ray environment around the moon. This instrument, called the Cosmic Ray Telescope for the Effects of Radiation (CRaTER), was outfitted specifically to model the cosmic ray effects on humans, both with and without shielding.

In late 2013 through 2014, a series of articles came out that detailed the initial findings. One of these papers, Does the worsening galactic cosmic radiation environment observed by CRaTER preclude future manned deep space exploration?, by Schwadron et al., definitively warned that it was looking pretty bad for the astronauts.

They combined cosmic ray measurements made by CRaTER with those made by the Advanced Composition Explorer (ACE) spacecraft to build a picture of the environment going back to about the year 2000. They then used a model to relate the GCR flux to the strength of the solar cycle, as indicated by sunspot number, going back to about 1950. Combining these two sets of data (observation plus model), they were then able to make a forecast about the GCR flux for the coming solar minimum, depending on just which minimum we end up with (more on this below).

They noted that, based on GCR flux measured by ACE during the previous solar minimum (~2009), male astronauts would have reached their recommended limit of GCR exposure within 400 days, and female astronauts would have reached theirs within 300. Based on forecasts of the next solar minimum (~2019), the CRaTER observations indicated exposure times would decrease by about 20%: about 320 days for male astronauts, and about 240 days for female. Given about six months to travel from Earth to Mars, and then six months back, a crew would easily exceed their GCR dose rates and enter dangerous territory.

In the latest paper, Update on the worsening particle radiation environment observed by CRaTER and implications for future human deep-space exploration, Schwadron et al. revisit this prediction, since we’re almost in the middle of solar minimum. Their conclusion? The 2014 paper overestimated the friskiness of our sun, and underestimated the intensity of GCRs, by about 10%. In other words, astronauts will be able to spend even less time than expected in deep space, because the cosmic ray environment was getting worse faster than expected.

Why was their prediction so far off?

What’s up with the Sun?

“That’s a very good and a very hard question,” said Nathan Schwadron, principal investigator for the CRaTER experiment. “I am not sure why the dose rates are going up so quickly. [But] I suspect two issues:

“2) The drift of cosmic rays has changed dramatically due to a recent reversal in the dominant polarity of the magnetic field within the solar system. This is a natural solar cycle effect, but may be accentuated due to the weak strength in the magnetic field.”

Every 11 years or so, the sun goes through a cycle. This cycle is observed through increasing and decreasing numbers of sunspots, magnetic field strength, and other forms of solar emanations. Humans have observed this cycle since about the 1600s, and these observations form one of the longer records of continuous human measurement. Right now, in mid-2018, we’re at the tail end of Cycle 24. Solar minimum is predicted to hit around 2020.

The flux of GCRs follows this cycle. During solar maximum, the GCR flux is low. During minimum, it’s high. When the charged GCRs pass through the Sun’s far flung magnetic field, they experience a torque. The net effect of this torque is that the GCRs don’t get very deep into the solar system before getting redirected back out again.

When the solar magnetic field is strong, during solar maximum, only a few, very high speed GCRs make it to the Earth. When the field is weak, during solar minimum, more GCRs can get to us, including lower energy ones.

At this point, it may appear that an increasing GCR flux is just a normal result of the approach to solar minimum, though the current minimum may be some kind of really deep minimum, and it’s approaching super fast. However, that is not the only story about the sun.

What’s down with the sun?

Back in 2011, the sun was nearing the top of its cycle, solar maximum. At that time, I filmed a pedagogical video on a prediction that was made by three sets of researchers. They forecasted that, based on observation and theory, the sun was going into a severe quiet period. I followed that video with a few additional pieces to expand on the concept.

A second group, the Global Oscillation Network Group (GONG) studies sound waves on the sun. Ripples of gas on the sun, observed as a wiggling Doppler effect on spectral lines, can be analyzed to reveal processes deep within the sun’s interior. A periodic feature the GONG group has identified using these helioseismic studies is called the Torsional Oscillation. This is a specific latitude band of gas inside the sun that rings with its own frequency. As the solar cycle progresses, these two bands start around the mid-latitudes (~55° N, ~55° S) and move toward the equator. Frank Hill et al. demonstrated that about halfway through the progression of this feature to the equator, a new torsional oscillation begins. The strength of these two bands can be a predictor of the strength of the next solar cycle. However, they also showed that the torsional oscillation had not yet started in 2010, well past the equivalent starting point during the previous cycle. Hill et al. concluded that Cycle 25 would be at least very late in starting, and possibly very weak.

The third indication came from observations of triply ionized iron spectra within the solar corona, by Richard Altrock of the Air Force Research Laboratory. I did an interview with Dr. Altrock back in 2011 on his observations, but here is the summary. Triply ionized iron is a good tracker of the sun’s corona.  Around solar maximum, features appear in the corona at high North and South latitude.  These features then progress quickly to the two poles up to solar maximum, and then disappear.  Thus, this “Rush to the Poles” is a good indication of the progression of a solar cycle.  As seen in Altrock’s diagram below, the Rush to the Poles for solar cycle 24 has barely started at a spot congruent to three previous cycles.  This suggested that the next cycle would, at the very least, start very late. 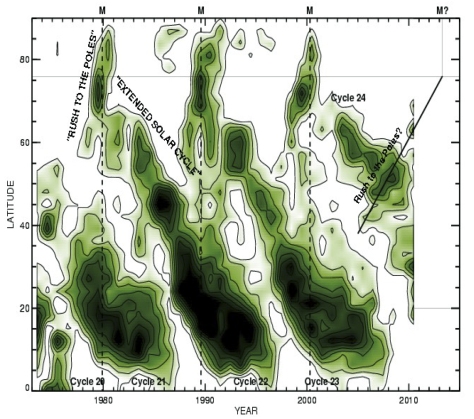 The sum total of these three sets of observations is that Cycle 25 will be late, weak, and possibly nonexistent.  In other words, the sun could be headed for a Grand Solar Minimum, something we have not witnessed since the late 17th Century. The Maunder Minimum was a period during which the sun sprouted virtually no sunspots. John Eddy, who named the period after E. W. Maunder, reexamined not only the history of sunspot observations, but also anecdotal evidence like stories of auroral activity. This event lasted some 70 years, and happened to coincide with an uncharacteristically cold period in Europe. Since then, the solar cycle has picked up and popped out sunspots every 11 years or so.

The CRaTER observations appear to support the Grand Minimum forecast. If this is the near future, what will it look like?

Every year or so, I check in on the sun. It has been very quiet lately. And I wonder, when will my kids next see a sun full of sunspots? Ten years? Seventy years? The measurements and analysis by the CRaTER team seem to suggest the latter.

However, it’s a different world now, and things have changed in the past seven years since the Grand Minimum forecast. The sun is a crafty beast, and it is not following the forecast. Please stay tuned for the next part in this series…

Over the last decade, the solar wind has exhibited low densities and magnetic field strengths, representing anomalous states that have never been observed during the space age. As discussed by Schwadron et al. (2014a), the cycle 23–24 solar activity led to the longest solar minimum in more than 80 years and continued into the “mini” solar maximum of cycle 24. During this weak activity, we observed galactic cosmic ray fluxes that exceeded the levels observed throughout the space age, and we observed small solar energetic particle events. Here, we provide an update to the Schwadron et al (2014a) observations from the Cosmic Ray Telescope for the Effects of Radiation (CRaTER) on the Lunar Reconnaissance Orbiter (LRO). The Schwadron et al. (2014a) study examined the evolution of the interplanetary magnetic field, and utilized a previously published study by Goelzer et al. (2013) projecting out the interplanetary magnetic field strength based on the evolution of sunspots as a proxy for the rate that the Sun releases coronal mass ejections (CMEs). This led to a projection of dose rates from galactic cosmic rays on the lunar surface, which suggested a ∼ 20% increase of dose rates from one solar minimum to the next, and indicated that the radiation environment in space may be a worsening factor important for consideration in future planning of human space exploration. We compare the predictions of Schwadron et al. (2014a) with the actual dose rates observed by CRaTER in the last 4 years. The observed dose rates exceed the predictions by ∼ 10%, showing that the radiation environment is worsening more rapidly than previously estimated. Much of this increase is attributable to relatively low-energy ions, which can be effectively shielded. Despite the continued paucity of solar activity, one of the hardest solar events in almost a decade occurred in Sept 2017 after more than a year of all-clear periods. These particle radiation conditions present important issues that must be carefully studied and accounted for in the planning and design of future missions (to the Moon, Mars, asteroids and beyond).

Welcome to Stone Telescope, a blog about how the rocks, both those under your feet and those above your head, can provide a deeper view into the cosmos.